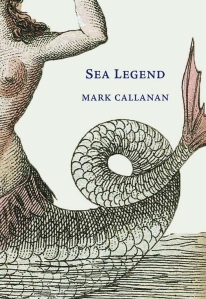 Mark Callanan has written a nautical tale bent by poet’s logic, replete with Newfoundland’s beauty but also its mystery: the mystery of woman, the mystery of mermaid, the mystery of night, of death, of shipwrecks and conch shell music that seems to agelessly speak to us. Callanan has written poems that issue imagery into seamless universe: his poems are of the sea, capable of a great sympathy (for a giant squid exhibit, for example) and also a terrible power. And he sees the sea in us: that squid-watcher, who happens to be you, ends up “watching your reflection in the glass.” But theme is secondary to the skill with language: Callanan has his eye on reader’s, not sailor’s, delight.

Sea Legend (Frog Hollow Press, 2010) has sold out. You can read the digital flip-book version here. Thanks to Frog Hollow for permission to reproduce it.

They drew her up among the tons of codfish,
a pair of glistening pearl studs at each ear.
Two clam shell halves concealed her nipples,
reminded them of dancing girls rigged out
in tassels–an obscene mockery or a tease.
From the waist up she was every woman:
your mother from a photo on a Caribbean beach;
a housewife transformed by the siren light
of evening; the fifth grade teacher who leaned
across your desk to demonstrate
a silk brassiere, her cleavage with arithmetic.

Below the waist she was scales and tail fin–
no fit place to put a reassuring palm.
They kept reaching out as if to pat a leg that wasn’t there.
They were divided over what to do with her:
Some said she should be laid to rest
in a proper grave; others, she belonged at sea.
So they settled on the latter, tipped the body
into the water and watched it fade from view.