Shortlisted for the 2011 BMO Winterset Award

“One of the most finely crafted books, from the level of the line on up, of the last couple of years.” 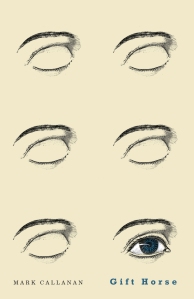 Gift Horse, Mark Callanan’s second full-length collection of poetry, was largely written following a near-fatal medical emergency in 2007. The poems offer up the story of a young man whose gratitude at being alive is undercut by Lazarus-like confusion and ambivalence. Brandishing a newly acute sense of mortality, Callanan emerges as an Atlantic flâneur stalked by terrifying sea legends, death-steeped domesticity (where even supermarket lobsters “weigh in against oblivion”) and the extinct Newfoundland Wolf. Understated, sinister and unsettling, Gift Horse is a work of considerable craft and vision.

“It’s rare to encounter a poet who can weave economics, wildlife preservation, public policy, personal and civic history, epidemiology and gastronomy together into the tapestry of metaphor using such deceptively simple language.”

“Callanan’s poetry is not fussy, nor is it driven by ego; it is humble, and it doesn’t take itself too seriously. It is, for the most part, blessedly free of sentimentality and filler. There is an exactitude to his art, displayed in the efficiency of his diction and his tightly organized stanzas.”

“Callanan’s precision with language and skill with slant rhyme give his poems music, while images of the natural world ground the collection with a bracing chill.”

With combs carved from porpoise jaws,
they rake their seaweed tangles out
and coif their hair like centrefolds
at a poolside party on the rocks.

One spikes a branch of coral
in a bun upon her crown
and holds an ivory mirror up
to look at the result.

Another drags a salvaged rasp
across her fingernails
and flicks the water with her fins
as if to test its warmth.

The last one wields a bottleneck,
still wedged with shipwrecked scroll,
to pry an oyster shell apart
or mark her wrists with gills.